Only seven oil companies applied for new acreage in the Barents Sea in the latest licensing round, down from 26 in a similar round in 2013. The continued decline will be a blow to the government, which had offered 125 new blocks in eight frontier regions of the Barents. 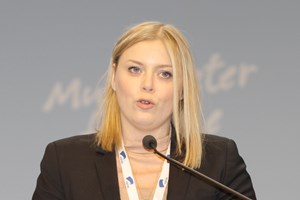 “The number of companies is relatively low, but it’s not a big surprise,” Oil and Energy Minister Tina Bru said in an email. There’ll still be “increased petroleum activity in the Barents Sea for decades to come,” she said, citing the Goliat and Snohvit fields already on-stream and several projects under development.

The Nordic country’s oil and gas industry has been keen for new acreage to offset an expected decline in production toward the middle of the decade. The Barents is estimated to hold more than 60% of the undiscovered resources off Norway, according to the nation’s petroleum directorate. But frontier licensing there has seen a steeper decline in interest than rounds for mature areas.

While exploration in the region has been encouraged by successive governments, drilling results from companies including state-controlled Equinor ASA and Aker BP ASA have fallen short of expectations. Aker BP was not among applicants in the latest round.

Companies that applied for new acreage were:

There’s been a period of “lower interest from the global majors,” Tord Lien, former Norwegian oil minister, said in an email. “We would have to admit that the exploration results have not been exactly where we hoped back in 2015.”

The petroleum directorate declined to comment on the number of applicants in the latest round.

EXCLUSIVE Why a U.S. hospital and oil company turned to facial recognition

An illustration picture shows a projection of text on the face of a woman in Berlin, June 12, 2013....

Oil futures lost ground Monday, with weakness tied in part to concerns over the demand outlook as COVID-19 infections...

The Valero refinery next to the Houston Ship Channel is seen in Houston, Texas, U.S., May 5, 2019. REUTERS/Loren...

In January, Occidental Petroleum announced it had accomplished something no oil company had done before: It sold a shipload...

The Oil & Gas Industry Searches for the Truth Amid COVID-19

ExxonMobil CEO warns of job cuts coming for employees in US, Canada

Andromeda’s Halo of Gases Is Bumping Up Against Our Own, Scientists Say